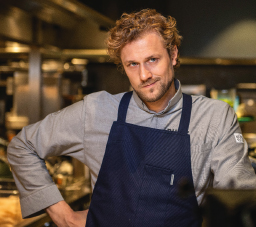 He's a chef, but you could also call him an inspiring think. An innovator. A warrior. A team player. A Dutch master. We're talking about Joris Bijdendijk, Michelin-star chef of RIJKS*, the restaurant at the Rijksmuseum in Amsterdam in the Netherlands. "We need one another to form a whole. It takes quality products to make quality dishes."

It all comes together on the plate: tastes, textures, colours. How do you create unity in a dish? "To me, unity is synonymous with simplicity. And the only way to achieve this is with self-confidence. It's an eternal pursuit. But I've learned and dare to use fewer and fewer ingredients. It's uncertainty that makes you add more and more to your dish. As if nothing is ever enough. But I swear by the adage that 'less is more'. More often results in the opposite of unity, namely a cacophony of disjointed items on your plate." 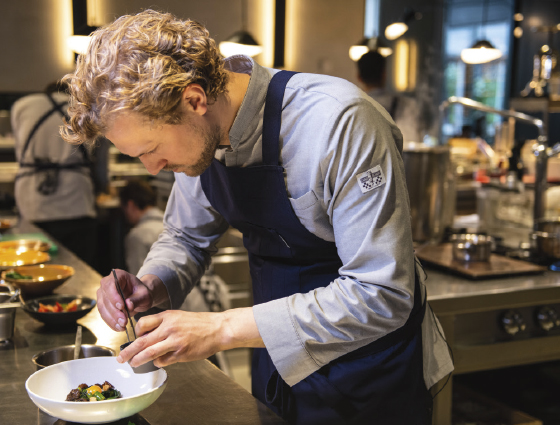 RIJKS opened in 2014. Two years later, Bijdendijk and his team earned their first Michelin star. Behind every dish at RIJKS is a well thought-out concept. "We've just launched a new dish using products from the Gelderland Valley: chard, snails, freshwater trout and a kefir made from organic milk from Blaarkop cows. I want to keep everything as pure as possible. So, the snails are whole, the trout is sliced into a coarse tartare and wrapped in a chard leaf. It's then topped with the kefir sauce.”

Culinary heritage
Bijdendijk obtains all products locally, i.e. directly from the farmer. "The Rijksmuseum houses the cultural heritage of the Netherlands. At RIJKS, we serve the country's culinary heritage." He calls his restaurant an ode to the Dutch farmer. "Naturally, we also use Dutch celeriac, buckwheat and red beets. But our culture also includes spices and beans that originate from the other side of the world. Or potatoes, which we've been eating here for the past 200 years. It doesn't get more Dutch than that." Smiling, he adds, "It's the most assimilated immigrant we know of.”

Bijdendijk promotes the culinary heritage of the Netherlands. "The Netherlands has fantastic small-scale farms with unique traditional breeds. But all the regulations and legislation have made their work difficult. The Chaams chicken, for example, the oldest pure Dutch chicken breed, is no longer found on menus. The last farmer with these chickens has stopped breeding them. And the Gelderland Blaarkop cows are also endangered. More and more unique Dutch products are disappearing as a result and, with them, our culinary heritage. We need each other to continue to form a whole. Without quality products, we cannot make quality dishes and the Dutch culinary culture will become endangered."

Dutch masters
Bijdendijk became a masterchef in 2017. At the Rijksmuseum, he is surrounded by Dutch masters. Does that inspire him? "I never take anything directly from a painting. So, you won't find still lifes with a lemon and a chicken on your plate. What appeals to me more is the idea behind a painting." He pulls out his phone and shows a self-portrait of Rembrandt with two circles in the background. "During his time, he was absolutely an innovator. This simple self-portrait is almost abstract when viewed from close up, with all those blobs of paint and scratches. But it is unmistakably Rembrandt when viewed from a distance." The painter was criticized at length for this style. "To silence the critics, he drew two perfect circles in the background, considered a nearly impossible accomplishment at the time. That is what inspires me: someone with the guts to go for simplicity, his own style and a clear goal in mind.” 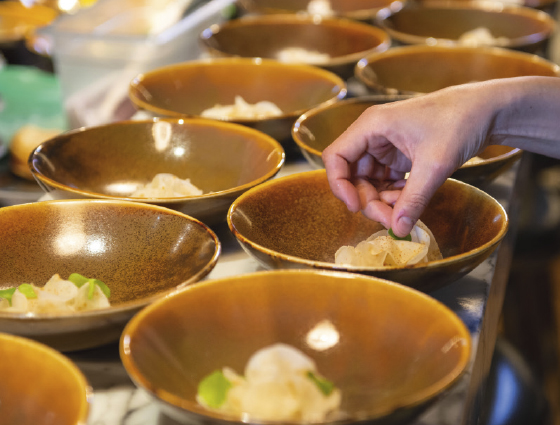 One team, one task
Like everything at RIJKS, much thought has also been given to the clothing. The kitchen and service staff wear the same bib aprons. "Everything we do here is done as a team. And we have one single task: to serve our guests a great-tasting and attractive meal." The only difference is that the kitchen staff wears blue, while the others have sand-coloured clothing. Why? "In France, blue represents the lowest rank and indicates that you still have much to learn. That's how I think about our job: you never stop learning." The clothing was designed together with Bijdendijk and his team. "When you spend 14 hours a day in the kitchen, you need an outfit that is comfortable to work in. That is
why the bib aprons have a cross on the back instead of a strap around the neck." And the shirts? "We wanted a shirt that looked more elegant, like you could wear it to a party. But with an attractive and informal collar.”

Edible garden
The claim that Bijdendijk obtains all ingredients from as close to home as possible became even more abundantly clear as we concluded our interview with a tour of the garden at the Rijksmuseum. "This was my dream: an edible garden. We have fennel pollen, cornflowers, East Indian cherries, citrus marigolds and begonias." He hands us a velvety, light yellow leaf from the daylilies. "Just taste how delightful they are.”

If you use our site, we will give you cookies.